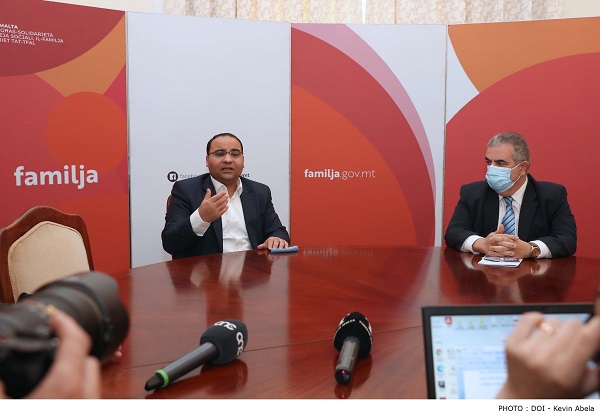 The Government amended the Social Security Act for persons born between 1 January 1956 and 31 December 1961, with the aim to ameliorate the negative effects that came along with the Covid-19 pandemic on the income of these people during the year 2020, and reflecting their pension.

These details were given during a press conference by the Minister for Social Justice and Solidarity, the Family and Children’s Rights Michael Falzon together with the Minister of Finance and Employment Clyde Caruana.

Minister Falzon stated that there were a number of people who were about to start receiving their pension and had their employment badly affected in the last year before retiring. Therefore, this legal change will be positively affecting 2,500 people and their families so that they do not have a reduction in their net pension due to this period of the pandemic that hit the world.

Minister Falzon explained that when assessing the pensionable income, the highest salaries of the three consecutive years are taken into account, or the highest income in the 10 consecutive years of the last 11, 12, 13 years before retirement age, depending on the person’s date of birth. There are persons born between 1952 and 1955 who have already retired and have been awarded a pension. However, there are others born between 1956 and 1961 who may still be in employment.

Minister Michael Falzon concluded by saying, “this Government is committed to do social justice to everyone, and even if there are no legal obligations to do so, we will still take care of these persons. As has been the case with those who have suffered injustices in the past, those persons who did not pay enough contributions and did not qualify for a pension and also through consecutive increases in pensions and supplementary benefits for our pensioners”. He stated that in the meantime more pension cases were assessed under the provisions of the new measure related to contributions paid before the age of 19, and so far 424 people have benefited from this measure. Of these, 401 are benefiting from a pension for the first time while 23 are widows who are benefiting from an increase in their pension through the measure.

On his part, the Minister of Finance and Employment Clyde Caruana, stated that the Government is putting this measure in place so that those persons who will be retiring in the coming years will not suffer any reduction in their pension. If the government had not intervened, it would have been too unfair for thousands of pensioners who, after working all their lives, would have suffered a reduction in pension due to the circumstances of the pandemic.

Minister Caruana said that this is another social measure that will be impacting peoples’ lives for at least twenty years. Thus, the income of the families of tomorrow’s pensioners will remain the same as if the pandemic did not exist. Minister Caruana said that this new computation will remain in place for the duration of the pandemic and later on this measure will be extended to other categories of pensioners.